We began our 90th anniversary season with a very special concert, and supper courtesy of the Radisson Blu hotel, in the unique surroundings of Belfast City Hall. The programme included works by Ireland, Piazzola, Mendelssohn and Shostakovich.

Full details of the 2010/11 season were unveiled, including the 2011 International Festival of Chamber Music, with priority ticket booking opportunities.

Belfast Piano Trio features Newry-born Joanne and David Quigley (violin and piano) with cellist Sasho Somov. Joanne is well known throughout Ireland and the UK as a violin soloist and orchestra leader, and is a former winner of the Arts Council’s ‘Young Artist Award’. She is currently lecturer in violin at the Royal Academy of Music in Dublin and at Queen’s University, and is a long-standing tutor for the Ulster Youth Orchestra.
Sasho was born in Sofia, Bulgaria, and was formerly Principal Cello of the Northern Sinfonia. As a chamber musician he has appeared with international artists such as Yuri Bashmet, Thomas Zehetmair and Tasmin Little. 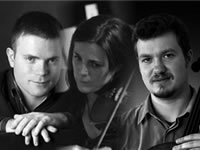 Earlier on the day of the Winter Recital, Belfast Piano Trio’s cellist Sasho Somov (pictured right) gave informal performances in Musgrave Park Hospital and Mount Oriel Day Centre in Belfast. Cheryl, from Musgrave Park, told us afterwards: ‘One lady said she couldn’t believe the quality of the music that was playing outside her ward- It was like being at a concert in the Grand Opera House. She said it really lifted her mind and was a lovely surprise….The staff were also commenting positively on the quality of the performance.