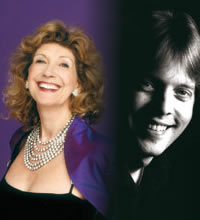 Dame Felicity Lott’s name is internationally known in operatic circles but her special love is the solo song repertoire and it was from this genre that she delighted the audience in the Great Hall at Queen’s on Saturday night with a mix of French and English songs. The Concert, organised by the Belfast Music Society, was part of an International Festival of Chamber Music, predominantly celebrating French music of the late 19th and early 20th centuries. BMS is lottery funded through the Arts Council of Northern Ireland and the concerts were presented in association with BBC Radio 3 for broadcast in the first week in April.

Exquisitely accompanied on piano by Eugene Asti, Dame Lott began with Ravel’s Manteau de Fleurs, Le Paon and Le Cygne. These difficult pieces were beautifully performed with Dame Lott’s gestures and facial expressions aiding the telling of the stories as she drew the audience in. Her breath control and attention to dynamics were quite magical and Asti’s sensitive accompaniments added much colour with his extra tiny details and subtleties. Debussy’s Ariettes Oubliees set were equally lovely and the different moods and interpretations achieved in the difficult and seldom heard L’Ile Heureuse and Lied by Chabrier were well interpreted by Dame Lott. Satie’s Le Chapelier and Je te veux brought the first half to a lighter finish. Dame Lott’s down-to-earth and relaxed manner was admirable. She let the songs speak for themselves without the need for endless talking and explaining that many artists feel they have to do these days.

In a good balanced way part two was devoted to songs from the English repertoire. The familiar Vaughan-Williams’Silent Noon and Quilter’s Now sleeps the crimson petal eachbrought appreciative gasps of “Aw” from the audience. Lott’s warm tone was perfect for Stanford’s From the Red Rose. Barber’s selection was varied in emotion and style and Lott’s ability to communicate the meaning of the songs was carried out with slick panache. We may not have seen Lott at her most vivacious this evening but elegance and experience radiated and the audience called for two encores. Well done BMS for enticing an artist of this fame and calibre to these shores.

A special celebration of late romantic song was the theme behind Dame Felicity Lott’s enchanting evening concert in the Great Hall at Queen’s on January 26. Featuring a mix of songs from the French and English repertoire, it was undoubtedly the highlight performance of this year’s International Chamber Music Festival, run by the Belfast Music Society.

Taking to the stage in an elaborate sapphire-coloured gown, Lott cut an imposing presence, elegant in stature. Beginning with the music of Ravel, Lott’s expertise in French interpretation, diction and style became apparent. Aptly accompanied by Eugene Asti, it was an engaging performance.

Lott possesses a remarkably clear voice, even in tone and with a colourful ambience. Her vibrato was immaculate, devoid of any “warble” that tends to affect many singers. As would be expected, she had a powerful grasp of dynamics and a flair for expression that was well-received by the audience.

It was a packed and well-balanced programme, featuring well over twenty songs (including two encores), which Lott cleverly used to convey a range of emotions. From tales of love to everyday wonder, there was something for everyone. Short numbers, such as Barber’s ‘Promiscuity’, were delivered with welcomed comic timing. The “Heigh ho” ending of Stanford’s ‘From the Red Rose’ was a particularly superb display of dynamic control.

The Great Hall at Queen’s provided an intimate and warm setting for the occasion. It was encouraging to see such a good audience turnout for the event. The Chamber Festival, though small in scale, nevertheless lends credence to the old adage that quality is definitely better than quantity.

The queen of English classical performs the best of French Impressionists

Since her 1975 debut as Pamima in Mozart’s The Magic Flute for the English National Opera, soprano Dame Felicity Lott has established herself as a singer with few peers and become a full member of the English classical aristocracy.

In her programme for the Belfast Music Society International Festival of Chamber Music, dedicated for the most part to the French impressionists, Lott is joined by Pianist Eugene Asti in the Great Hall at Queen’s University.

Lott opens the night with Ravel’s ‘Manteau de Fleurs’, written for actor Paul Gravollet, who also wrote the words. Like most of Ravel’s vocal music, the piano’s chromatic accompaniment is a blanket of arpeggiated chords and chimes that allow the soprano’s voice to hover above with the melody. Lott’s performance is dramatic and she engages with the audience incredibly well.

The other Ravel songs, taken from the 1906 song cycle Histoires Naturelle, are set to Jules Renards’ animal poems ‘Le Paon’ (‘The Peacock’) and ‘Le Cygne’ (‘The Swan’). The latter’s words certainly provided the composer with suitable material for his stylistic tendancies, including lines like: ‘He glides upon the basin, like a white sleigh, from cloud to cloud. For he is hungry only for the snowy clouds that he sees born, move, and become lost in the water.’

Although short pieces, the music is anchored in the impressionist style and is beautifully performed with a sensitive piano accompaniment from Asti.

Keeping with the theme of French music, Lott performs Debussy’s ‘Ariettes Oubliees’, in which the composer set texts by fellow national Paul Verlaine in 1888. The music is characteristic of his Piano Preludes, and can be seen as a literal interpretation of Verlaine’s poem. Debussy’s setting for the voice is superb and Lott captures the sentiment of each song.

Also included in the first half are songs by Chabrier and perhaps surprisingly, Satie. Throughout his life, Satie was a pioneer of contemporary music and rather than describe himself as a musician preferred the term ‘phonometrican’, meaning someone who ‘measures sound.’

This description is fitting when we consider Gymnopedies, published in 1888. But his songs ‘Le Chapelier’ and ‘Je te veux’ are slightly more restrained. Lott’s performance of these French songs is masterful, with a firm grasp of the linguistic contours of the texts.

Moving into the second half, Lott performs from the English composer Frederick Delius, whose music can be seen as an anglicised exposition of his French counterparts. Delius’ music for ‘In the Garden of the Seraglio’ is intensely romantic, yet exists as an entirely different musical language from the chromatic harmonies of Ravel or Debussy.

Delius wears his heart on his sleeve, and Lott’s approach with these pieces is a sentimental one. Similarly, Stanford’s ‘From the Red Rose’, with words by AP Graves, is a typically English affair, free of any of impressionist meanderings.

Among the final pieces of the night, Vaughan Williams’ ‘Silent Noon’ is a quintessential example of the composer’s work, and the evening ends with a series of songs by the American composer Samuel Barber. ‘The Monk and his Cat and Promiscuity’, taken from Barber’s Hermit Songs of 1953, provides the best moments of the night.

These strange musings from ancient Irish poetry are markedly different from the other repertoire of the evening, perhaps best described as witty, farcical, cryptic conundrums. But Lott’s ability to perform Barber as it was intended is testament to her abilities not only as a performer but as an actress. All in all, a thoroughly entertaining performance.