Rebekah Durston began studying the violin at the age of seven and attended the Guildhall School of Music and Drama Junior Department. She was a music scholar at Charterhouse, before going to the University of York to study music and continuing her studies as a postgraduate at the Royal College of Music as a Leverhulme Scholar. She was awarded the Century Early Music Prize and graduated with distinction.Rebekah subsequently worked all over Europe as a violinist while based in London, and enjoyed performing with the King’s Consort, the Orchestra of the Age of Enlightenment, the London Handel Orchestra and the Academy of Ancient Music, to name a few. In 2001 she moved to Northern Ireland with her young family and started to teach violin. In 2007 she founded the Ballymena Chamber Orchestra, a highly successful community-based orchestra that performs regularly throughout the year. 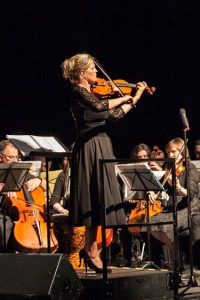 She was awarded a BEM in the New Year’s Honours List for her services to music in Northern Ireland.