The RTÉ ConTempo Quartet is currently Ireland’s national television and radio broadcaster’s quartet-in-residence and is also the resident quartet on the west coast of Ireland in the Galway Music Residency.

Praised as a “fabulous foursome” (Irish Independent) and noted for performances that are “exceptional” (The Strad) and “full of imaginative daring” (IrishTimes), the RTÉ ConTempo Quartet has forged a unique place in Irish musical life. Since its formation in 1995, the quartet has performed more than 2,000 concerts worldwide in 46 countries, to global personalities such as Nelson Mandela, Pope John Paul II and Michael D. Higgins, and to Hollywood stars and Nobel Prize-winners. 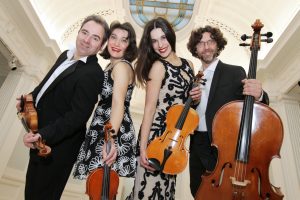