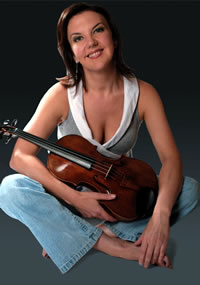 Tasmin Little and John Lenehen buff up the gilding

1991 was a special year for the Belfast Music Society as they celebrated their 70th anniversary. The event was even more special as they were joined by one of the UK’s brightest classical stars, Tasmin Little.

Now, almost 20 years later, she graces their stage once more, joined by collaborator and renowned pianist John Lenehan. In a programme exploring the development of music for the violin, both Lenehan and Little put together an eclectic fusion of different styles and sounds as they take us on a journey entitled ‘Partners in Time’.

Top of the bill is Kreisler’s ‘Praeladium and Allegro’, a work written mischievously under a different name by the flamboyant impresario. The performance is full of energy, particularly in the Allegro section where challenging music awaits both musicians. It sets the scene neatly for Bach’s ‘Sonata in E’ minor, a deceptively simple work which, although rooted in baroque musical tendencies, has many moments which both surprise and challenge the listener’s perception of the composer.

Bach may have had a reputation as an intellectual heavyweight, but all academic penchants are melted away to reveal a delicate and emotional work akin to the kind of simple dolce expression of the Goldberg Variations. Little’s grasp of the delicate melodic contours, underpinned by Lenehan’s accompaniment, breathe life into a performance enjoyed by all.

Following Bach with Mozart may seem like a contradiction – while the former spent many years devoted to writing music for the church, the latter led a colourful and rather ostentatious lifestyle, as mischievous as any Kreisler pastiche.

Mozart’s ‘Sonata in C Major’ is a work by a composer who is in full grasp of his compositional technique and prowess, as well as his own mastery of the instruments for which he was writing. The performance brings into greater relief the skill and dexterity of our soloists, whose grasp of varying styles – from baroque to classical – is palpable as they switch from one to the other.

Lenehan’s energetic rendition of Mozart’s cheeky opening ‘Allegro vivace’ is matched with equal vigour by Little’s own adherence to the composer’s playful nature. Light hearted musings aside, there is a rather beautiful ‘Andante sostenuto’ which gives the violin a chance to sing, followed by an exciting finale in the style of a Rondo, bringing the first half to a close with panache.

The second half of the evening is a somewhat different affair. Grieg’s music always has the ability to transport its listener into a fairytale, and more often than not conjures up vivid images of mythological landscapes and colourful backdrops. This can certainly be said of his ‘Sonata No. 2 in G Major’.

Don’t be fooled, though, by the major key the title suggests. The work is filled with a melancholy found in the ‘A minor Piano Concerto’, and the pathos of Peer Gynt. Both performers do a fantastic job juxtaposing the rather more ‘romantic’ elements of the music against the ‘folk’ aspects which Grieg has weaved into the music; the result is a most fantastical listening experience.

Tchaikovsky’s nostalgic ‘Melodie’ from his Souvenir d’un lieu cher provokes a similar response from the audience, and indeed the musicians. The piece was originally intended as the slow movement from his Violin Concerto, but was never realised as such. Strange, as the piece would have worked remarkably well, evoking the kind of romantic idealism displayed in his Romeo and Juliet or the passionate tragedy as heard in the pathétique ‘Symphony No.6’.

The work has a tinge of sadness beneath, brought to the surface by a suitably restrained performance from Little – and although understated, the nuances of emotion come through well.

To finish, Bela Bartok is called upon for his raw and untamed folk music, fused with his own idiomatic and unique style. It is from this kind of material that great works such as 1923’s Les Noces were born. No doubt Stravinsky would have been aware of Bartok’s music, the young Béla having travelled across Romania in 1909, sketching the folk music he heard. The music certainly has a primal quality to it, and it is this that makes it ever more endearing.

Like Tchaikovsky’s snapshot of a time and place, Bartok’s Romanian Folk Dances are a window into early 20th century eastern European musical traditions. Little and Lenehan perform a rich and vibrant interpretation of the dances. Of particular note are the passages for harmonics which are handled superbly by Little.

Tasmin Little and John Lenehen’s unique approach to their programme yield a casket of treasures. Tonight the Belfast Harbour Commission’s grand surroundings are treated to something special, with the gold gilding lining the walls looking slightly brighter on leaving than on arriving.

Internationally-renowned violinist Tasmin Little took her ground-breaking project ‘The Naked Violin’ to Maghaberry Prison and the City of Belfast School of Music on Friday 21st May, as part of the Belfast Music Society’s new summer recital initiative.

Review from ‘The Jaily News’

From Bars to Strings at Maghaberry

“The Naked Violin” is apart of the Belfast’s Music Society new summer recital initiative and apart from visiting Maghaberry, on her whistle stop tour she was also visiting Belfast’s School of Music on Friday afternoon.

During the hour long musical session Tasmin, who impressively needed no music sheets, introduced works specifically written for solo violin and demonstrated the many different faces of this versatile instrument. The
works included music from Vivaldi’s seasons, (Spring), Bartok’s Romanian Folk Dances, Mozart’s Sonata in C and she also played the haunting theme tune made famous by the film “Schindler’s List”, by composer John Williams.

Tasmin also encouraged the audience to ask her questions and she displayed her infectious enthusiasm by waxing lyrically about violins and highlighted how she loved, “the lyrically expressive quality of the violin.”

Commenting on the recital, Trevor Patton, Head of the Healthcare unit in Maghaberry said:

“Tasmin engaged with the inmates on their own level telling the story behind the music and what the various composers were expressing via their music. This had real meaning for the inmates and helped them appreciate what the pieces were actually saying to them. Music can be appreciated by everyone, any where. It is irrelevant whether the audience are behind bars or not. Music can be a wonderful creative outlet for prisoners. ”

One of the inmates said he was impressed with how passionate Tasmin was about playing the violin and he admired her extraordinary talent and added that it was an honour and privilege to listen to such beautiful live music.

Tasmin received the 2008 Classic FM Gramophone Award for Audience Innovation for “The Naked Violin” and the project was featured on TV’s South Bank show.

1. Tasmin Little has played for violin for 36 years. “Partners in Time” was launched by Tasmin earlier this year and was named Classic FM’s CD of the week in February.
2. In addition to her regular solo performances Tasmin plays/directs orchestras such as the Royal Philharmonic, European Union Chamber Orchestra and London Mozart Players.
3. In 2008 Tasmin made her fifteenth appearance at the BBC Promenade concerts.