Ben McAteer won Northern Ireland Opera’s inaugural Festival of Voice competition and featured later the same year in concert with the Ulster Orchestra and Dame Kiri te Kanawa. He was runner-up at the 2012 Kathleen Ferrier Awards and is currently a Samling Scholar, having completed his studies on the Guildhall School of Music & Drama’s opera course. 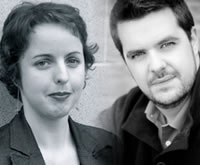