Chinese-American flautist Sabrina Hu and Derry-born pianist Cathal Breslin have been performing together internationally since 2001, appearing at prestigious concert halls and on radio and TV throughout the world. Now based in Memphis, Tennessee, they founded the Walled City Music Festival in Derry in 2008 and remain its Artistic Directors.

A seductive programme of music from France and Brazil – highlights include Ravel’s ‘Ondine’, Debussy’s ‘Syrinx’, and Piazzolla’s ‘Histoire du Tango’.

This concert was presented in partnership with Ulster Bank Belfast Festival at Queen’s. 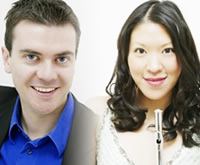