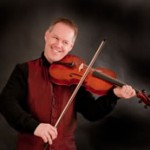 Alan McClure grew up in Ballymena and began learning the violin at the age of 14 after hearing Beethoven’s violin concerto – he went on to perform the piece both in Ireland and in the USA. Alan works with many distinguished orchestras in Ireland, the UK and the USA and currently performs chamber music with the Ireland String Quartet. A fluent improviser in many styles including jazz and rock, he is also in demand as a session musician. His teaching was recently featured in BBC2’s documentary Composer Yourself where he helped some beginner players prepare for a performance with Camerata Ireland.

Jonathan Rea studied music at Cambridge University. He then spent 15 wonderful years teaching music in Bangor Grammar School before beginning a new career as a freelance musician. He is now active as a conductor, pianist, composer and producer, with a wide range of clients including BBC and RTÉ. He has produced and conducted commercial recording sessions with the City of Prague Philharmonic Orchestra as well as several more intimate albums with local performers.