Belfast-born flautist Aisling Agnew and Scottish guitarist Matthew McAllister have performed throughout Ireland and the UK as well as in North and South America, Europe and the far East. They recorded their critically acclaimed debut CD ‘Recital’ in 2006, and have a new recording due for release in 2014.
Programme included works by Bach, Locatelli, Poulenc, Bizet (arr. Borne) and Greg Caffrey 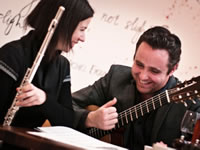